Creating Change for the Better

Every day, policymakers at the local, state, and federal level make decisions that could impact the veterinary community, pets and the people that love them. It’s vital that we monitor and respond to these policies by sharing our feedback and experiences. That’s why NAVC is thrilled to introduce our new veterinary advocacy initiative!

What a great initiative! Veterinary team, animals advocates, pets lovers forming one team to defend and protect animals is a dream come true for me.

When you sign-up to become an advocate, you’ll receive emails with updates on proposed legislation, rules, and regulations impacting pet health. Often these emails will include a call-to-action like signing a petition, emailing policymakers, tweeting representatives, making phone calls, and more. You’ll also have exclusive access to advocacy webinars, trainings, and in-person meetings with government officials.

Sign-up to become an NAVC advocate then keep an eye on your inbox for your first opportunity to take action on veterinary advocacy. 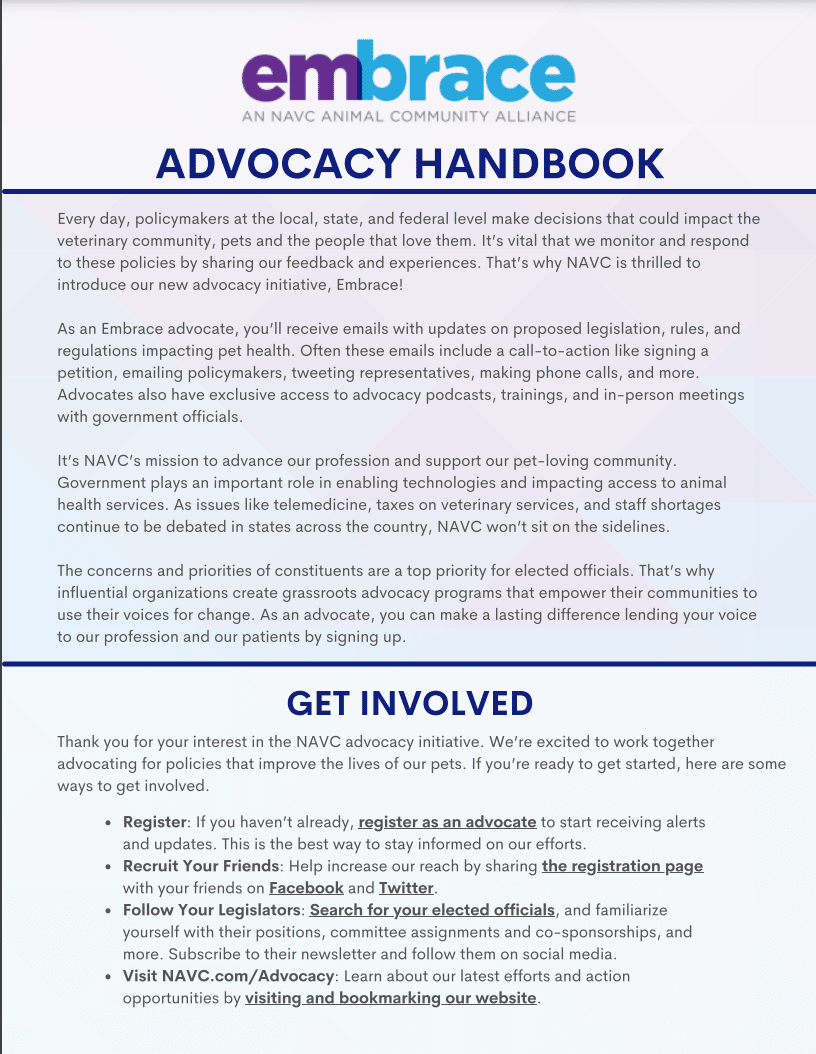 Domestic violence takes many forms. Unfortunately, a common form of violence and manipulation by abusers includes threats or actual injury to pets. According to the ASPCA, 71% of pet-owning women entering domestic violence shelters report that their abuser threatened, harmed, or killed a family pet. And as many as 25% of domestic violence survivors reported returning to an abusive partner out of concern for their pet.

The bi-partisan Paws Off Act informs pet owners of the risk and presence of xylitol in everyday products like sugar-free gum, breath mints, vitamins, cough drops, sugar-free desserts, peanut butter, and more. This legislation would require food containing xylitol to include a warning label outlining its toxic effects on pets.

Introduce Yourself to Your State Legislators

Across the United States, thousands of state legislators have been sworn into elected office. They will be making important decisions every day on issues they may know nothing about.

Let’s ensure state legislators make informed decisions about animal health, the veterinary health profession, and the human-animal bond. You are an expert on these topics and an important resource in your community. Help elevate veterinary advocacy.

Ask Your Representative to Support the Healthy Dog Importation Act

Over one million dogs are imported into the U.S. each year. However, only about one percent of those are screened for diseases such as rabies, influenza, hepatitis, distemper, and others. This poses a serious health threat not just to other dogs and household pets, but to our livestock and food supply. The Healthy Dog Importation Act would require every dog entering the country to be permanently identified, in good health, and certified by a licensed veterinarian that it has received all the proper vaccinations. The bill would also streamline federal oversight, ensuring documentation and import permits are shared electronically between APHIS, CDC, and Customs and Border Patrol, while clarifying APHIS’ key enforcement authority.

Thanks in part to the voices of our Embrace advocates, important provisions in the Hot Cars Act were included in the recently passed Infrastructure Investment and Jobs Act. Now that the bill has been signed by President Biden, the U.S. Department of Transportation is mandated to take action aimed at preventing deaths of children and pets left behind in hot vehicles.

Pairing a veteran with a Service Dog can cost up to $25,000 — including training, follow-up services, and support. The Puppies Assisting Wounded Servicemembers (PAWS Act) allows veterans with post-traumatic stress disorder (PTSD) to apply for a grant through the Department of Veterans Affairs (VA) to cover the necessary costs for these services – including veterinary services.

Roughly 20 veterans per day die by suicide, often because they don’t have access to effective treatment. These veterans deserve a choice in their recovery from PTSD, traumatic brain injury, and military sexual trauma. In a recent long-term VA study, the VA found that “there was a 3.7-point drop in PTSD symptoms among those with service dogs, along with sleep improvements and declines in suicidality and anger.”

Call for Entries For 2023 VETTY Awards

Who Will Be This Year's "Pick of the Litter"?Call for Entries to…